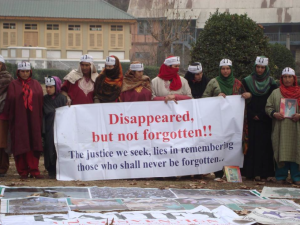 The Kashmiri Association of Parents of Disappeared Persons (APDP) & Jammu Kashmir Coalition of Civil Society (JKCCS) will be commemorating the International Day of the Disappeared on Wednesday, August 30th with a silent sit-in protest (at Municipal Park, near General Post Office, Residency Road, Lal Chowk, at 12:00 noon). It is estimated that since 1989 between 8,000 & 10,000 mostly men & boys have been forcibly disappeared. That is about one person every day for 28 years.

Forcible disappearance is an unspeakable crime with a grief among survivors that is complex, unforgiving, & unresolvable. This is a day to highlight the character of this crime, to educate about it, & to demand governments around the world stop using it as a way to repress dissidence & punish activists for social justice.