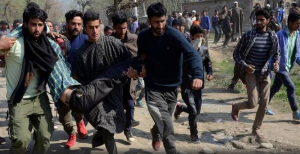 This April 1st article in Indian media titled “Injured protesters fill J&K hospitals” says Indian occupying forces used tear gas shells, bullets, & “shotguns,” by which they certainly mean pellet guns, to “control protesters” in the Shopian & Kulgam districts of Kashmir. What would be the compelling need to control protesters if India is, as it claims, the world’s largest democracy? It’s a lot like Israel’s claim to being the most moral army in the world or the US claim to being the leader of the free world: a burlesque of political reality.

According to this report, over 50 young people, unarmed civilians, were admitted to hospital in Srinagar on Sunday, 40 of them with pellet gun injuries mostly in the eyes. An ophthalmologist at the Srinagar hospital said “I performed 28 eye surgeries on Sunday. All cases were bad with perforations due to pellets. Many are at the risk of losing their sight.” To legitimize their use, the Indian army claims it shoots pellets below the waist–as though shooting a young man’s genitals off were a human rights standard. Clearly the eyes are targeted with the intent to blind, disfigure, disable protesters & demoralize political struggle against occupation.

With so many killed & injured in just one day during three hunt to kill operations, it is imperative to stand with Kashmiris in their historic struggle against colonialism & occupation by getting out the word of what is happening since the internet in the districts under siege has been snapped.