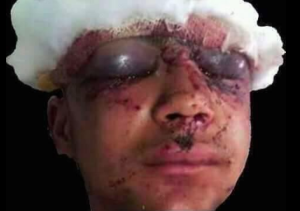 This is a Kashmiri boy who sustained these pellet gun injuries during the 2016 uprising when over 15,000 people were injured by pellet munitions, designated by India as non-lethal weapons. The Indian army’s use of pellets was so indiscriminate in 2016 that it was condemned in international media after Kashmiri activists exposed the barbarism on social media. In response, Chief Minister Mehbooba Mufti claimed that Indian soldiers in basic training would be instructed in the proper use of pellets for “mob control”–which to the deranged militarist mind means directing fire below the waist. That is the cognitive disfunction of occupation & genocide because there is no way in hell that a volley of lead pellets shot at high velocity anywhere on the body can be anything but inhuman, lethal, & constituting a major human rights crime.

Kashmiri doctors reported that at least 40 civilians were admitted to hospital on Sunday for pellet gun injuries, mostly to the eyes. One ophthalmologist said he performed 28 eye surgeries on Sunday. This criminality is intentional for the purpose of disabling, disfiguring, & demoralizing especially young people engaged in resistance to occupation.