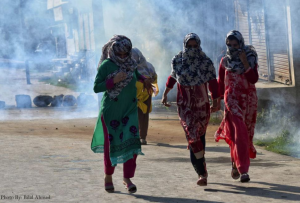 Kashmiri women are running from a tear gas & pellet gun attack by Indian forces on a funeral last July 21st. Tanveer Ahmad Wani, the young man killed, was a tailor by profession. He was executed when the Indian army opened fire on unarmed protesters in the village of Arwah in Beerwah town of the Budgam district.

There are so many human rights crimes involved in this event it would take an international tribunal months to fully lay out the charges: setting up a hunt to kill operation; shooting live ammo at unarmed protesters, killing unarmed protesters; attacking mourners at a funeral with a deadly arsenal.

End the occupation. Self-determination for Kashmir. May young Tanveer Rest In Peace.