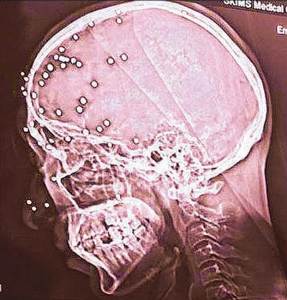 Came across a report in Indian media that between July 8th, 2016 (the death of the Kashmiri man whose name & image are censored on FB) & August 18th, 2016, the Indian occupying army had fired 1.3 million lead pellets at unarmed protesters. The Central Reserve Police Force (CRPF) reported that to the Jammu & Kashmir High Court in response to legal action demanding the use of pellet guns be ended. The CRPF admitted to firing over 3,000 pellet cartridges, each containing about 400 to 500 pellets.

That was the discharge of pellets just in one month & is likely lowballing the actual number discharged in a military rampage that went on several months longer. At one point, in response to international exposure on social media, the Indian army considered replacing lead pellets with rubber ones. It’s a mockery of our intelligence to suggest that rubber pellets fired at high velocity would be more humane or one whit less dangerous, especially when combined with the other arsenal they use of tear gas, grenades, & live ammo.