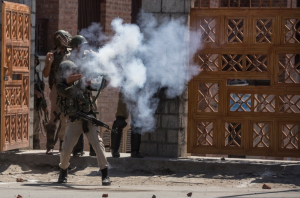 Why are Kashmiri stone pelters condemned by so many for violence? Why not Indian occupying forces who fired pellet guns & tear gas shells inside the Jamia Mosque in Srinagar after Friday prayers during the holy month? Almost 100 people, including women & children were injured. Some claim the violence started when young people coming out of Friday prayers began pelting troops with stones. But why were troops deployed & surrounding the mosque in the first place except as a provocation & a violation of sacred space–very similar to what Israeli troops do at Al Aqsa Mosque in East Jerusalem? So did the troops start shooting up the mosque after they got hit with a few rocks? Or did young people start pelting them after they began their sacrilegious violence? And why would they start shooting worshippers in the mosque to retaliate for stone pelters outside the mosque?

(Photo of Indian troops outside Jamia Mosque by Abid Bhat/KO)