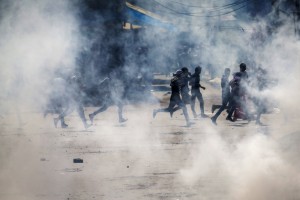 On Sept 10th, an Indian high court in occupied Kashmir ordered authorities to strictly implement a 1932 law–which they have not enforced for nearly 70 years–making slaughter of cows punishable with up to 10 years of imprisonment plus a fine.

Cows are remarkable, even if underestimated, animals. But this post is not about the sacredness of cows in Hinduism nor the virtues of vegetarianism. It is about the politics of beef in India which is a tangled web of right-wing Hindu nationalism & discrimination against Muslims & the oppressed castes who number about 430 million people combined (nearly one-third of the Indian population of nearly 1.3 billion people) who are beef eaters.

India’s prime minister Narendra Modi came to power with the support of Hindu right-wing nationalist groups who want cows revered as sacred, oppose cow slaughter & want it considered a crime–though the impulse behind it is less likely religious than it is political persecution of Muslims, Dalits, & other oppressed castes. Kashmir is a predominantly Muslim region.

It is in the market that religious attitudes toward cows conflict head-on with the realities of capitalism. India is the world’s largest exporter (exceeding even Brazil) & fifth largest consumer of beef. In the year 2012-2013, USD $29 million of beef was exported from India. When Modi, a Hindu nationalist, was chief minister of the state of Gujarat from 2001 to 2014, he banned beef slaughter & consumption under penalty of seven years in jail. Modi also presided in Gujarat over a Hindu nationalist pogrom against Muslims. However at the same time, meat export from Gujarat doubled & the state has one of the largest numbers of slaughterhouses. Throughout India, there are an estimated 30,000 illegal slaughterhouses. Some sources claim these are all Muslim-owned but that isn’t the way capitalism works. If there’s money to be made, religious scruples become ceremonial.

The ban on cattle slaughter has generated a black market industry, particularly to Bangladesh where an estimated two million head of cattle are smuggled annually for food & tannery factories. Bangladesh estimates the worth of cattle smuggling from India at three percent of the country’s USD $190 billion economy.

There are a lot of Indian jobs related to the cattle industry–from farmers & traders to people engaged in processing, deboning, packing, & those engaged in the tannery industry, pharmaceuticals where cow urine is used, & pet food. Poor farmers, already under siege by agribusiness plantations & threatened by crop failure or drought, cannot sustain unproductive animals just because the state declares them sacred. Thousands more farmers would be economically destroyed.

There is a debate generated by a book titled “The Myth of the Holy Cow,” written by Professor Dwijendra Narayan Jha, who claims, contrary to Hindu nationalists, that beef eating was common in ancient Hinduism before the advent of Islam to India. That’s possible since we know from Catholicism & other religions that proscriptions come & go & are most often influenced by political events. But the dispute now in Kashmir & the rest of India is not over Hindu theology & practice, nor is it over advocacy of vegetarianism. It is about right-wing fundamentalists & nationalists under the guise of religion stoking conflict & legitimizing persecution of Muslims, Dalits, & the other oppressed castes–not because they eat beef but because they are persecuted in India.

This photo is Kashmiri activists protesting the beef ban being attacked by Indian police & paramilitary thugs.