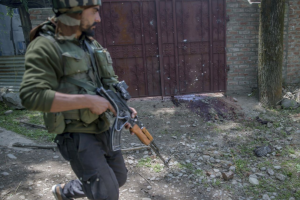 Kashmir Reader published a report today that two “militants” killed by the Indian army last Thursday night in the town of Uri turned out to be elderly men who appeared to be in their 80s, far too old to be identified as militants.

This was discovered when local police brought the bodies late Friday night to the Gantamulla graveyard “where unidentified militants are buried.” The reporter suggested they were hoping to bury the bodies (evidence of a human rights crime) without scrutiny. But the gravedigger & locals, who were shocked at the discovery, are demanding an investigation.

This incident raises several concerns. When the Indian army reports on these hunt to kill operations, they say they were acting on reliable tips or “specific information” from their network of snitches that militants are holed up in an area or a house. But it’s quite clear in reading many of these reports that the army has no idea who they are hunting. So what exactly are these operations all about if the army doesn’t really know who it’s targeting. Is there no concept of due process in Indian law? Of course the answer is no, not governing the Indian military in Kashmir. The Indian army has impunity under the draconian Armed Forces Special Powers Act (AFSPA).

Does a militant have to be accused of an actual crime to be subject of one of these hunt to kill operations? Or does just being fingered by someone in the snitch underground suffice to condemn them to execution? Clearly, if two elderly men were assassinated, the snitch underground is not working reliably. Maybe someone just had a grudge against them. Maybe the army targeted the wrong house. Maybe the seniors were related to a militant or got caught in crossfire or were killed just for the hell of it.

Since the Gantamulla graveyard is a designated burial ground for “unidentified militants,” we are led to believe that mistakes are often made by the army, that taking innocent human life in Kashmir is a “comme ci, comme ça” kind of thing. No big deal if you execute a couple old guys, someone’s beloved fathers or grandfathers. The Indian army reported that it executed 10 more militants since Friday. Will all 10 be identified & their families notified? Or will some end up in the graveyard for the unidentified?

This Indian soldier is eyeballing blood pouring under the entrance to the house following a tip that a “suspected militant” was hiding there. This is the site where Sabzar Bhat & Faizan Ahmad were killed. So based on reports from the Indian army, we are led to believe that the army, based on a tip, shows up armed to the teeth & starts shooting without knowing for sure who the hell is in the house. All sorts of mistakes must be made. Which is why they have a graveyard designated to hide them from public scrutiny.

Maybe the Indian army has impunity under the AFSPA but it doesn’t in the court of public opinion. We must stand with Kashmiris in demanding: End the occupation; Self-determination for Kashmir.May the two elderly gentlemen & other unidentified victims at Gantamulla Rest In Peace.