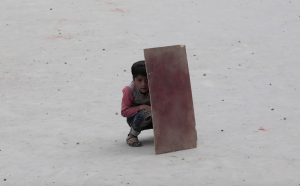 Srinagar, Kashmir outside the Jamia Masjid mosque after Friday prayers, May 19th:

The caption says this little boy is taking cover behind a plywood board during a confrontation between youth, Indian police, & paramilitary soldiers outside the mosque after Friday prayers. Dramatic photo because it shows how reckless occupying forces are with the lives of small children when the confrontation this little guy was trying to avoid getting hurt in was quite intense.

The army has made this mosque a center of controversy, very like Israel has the Al-Aqsa mosque in East Jerusalem, by denying access to it for congregational Friday prayers. They seal all entry points using barbed wire barriers & armored vehicles, deploy troops around the mosque, & use tear gas & pepper spray against protesters. Last year, they closed down the mosque for 19 consecutive Fridays.

Preventing people from worshipping is nothing but a provocation. The army claims it’s to prevent protests but if they weren’t cordoned around the mosque people would be worshipping, not protesting. If they weren’t occupying Kashmir & murdering youth, there would be no need for protest.