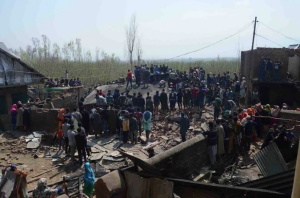 This complete destruction of homes is a routine part of the Indian army’s hunt to kill operations in Kashmir. There have been photos of sheep flocks slaughtered in these operations. It’s also routine in occupied Palestine where Israeli bulldozers take down entire villages as part of the genocide. Indian & Israeli officials justify this by pushing the international panic button of ‘Islamist terrorism’–the same thing used to justify carpet bombing civilians in Syria, Iraq, Afghanistan, Yemen, Libya & torching whole villages in the Rohingya genocide in Burma.

The international structures & movements of political solidarity must be rebuilt & mobilized to oppose persecution, war, occupation, & genocide.
“Whoever saves one life, saves all of humanity” & “an injury to one is an injury to all.”