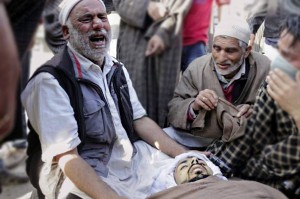 The story of what happened today in Handwara, Kashmir (a town about 70 km/37 miles from Srinagar) is undisputed, even if inadequately reported. Two young men were shot dead, & several others, including a 70-year-old woman, lie in hospital with critical injuries after Indian occupying troops opened fire on unarmed protesters who were protesting the molestation of a young girl by an Indian soldier who followed her into a public toilet.

Some witnesses say the troops opened fire on protesters trying to tear down the Indian flag from a flag pole near an army bunker. Others say protesters pelted stones at the bunker. Neither of those acts require lethal force. There are no reports on how Mohammad Iqbal was fatally shot in the head & Naeem Qadir Bhat fatally shot in the abdomen.

This isn’t just an isolated incident involving molestation by a rogue soldier. It’s the very matrix of the Indian occupation of Kashmir: rape systematically used as a weapon of social control where soldiers expect impunity from prosecution. Military use of lethal force without provocations against unarmed protesters is the modus operandi of the Indian occupation going back decades & puts the lie to all those stories about “militants” & “terrorists” executed in shootouts with paramilitary death squads.

Even the Indian army’s response was pro forma. A spokesman said they regretted the “unfortunate loss of life” & matters will be investigated. The way that goes, after several months of legal puttering, a military kangaroo panel will clear the molester of all culpability & find the soldiers had just cause to execute.

Many claim India has a right to occupy Kashmir for reasons of territorial integrity & sovereignty. Why would anyone who eschews rightwing nationalism accept an arrangement brokered by English colonialism to maximize conflict? This conflict is not rooted in ancient history but in English machinations when it departed India. Those who support the occupation have to ask themselves if the methods used by India are those of a civilized, let alone a democratic society: disappearances, mass graves, mass incarceration, summary executions, torture, mass rape, shooting down unarmed protesters–& if they think Indian sovereignty is worth all that.

Where one likes it or not, Kashmiris have a right to choose how they will be governed. That is the right of self-determination.