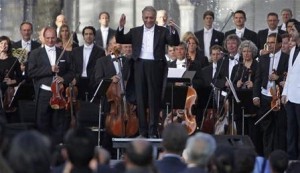 In preparing a post about the struggle in Kashmir against India’s brutal occupation, I found a Sept. 2013 report about a concert scheduled in Srinagar organized by the Indian government & German embassy in India where Zubin Mehta was going to conduct the Bavarian State Orchestra–the first concert of its kind in Kashmir.

Activists & political organizations demanding independence from India called on Mehta to cancel his concert because the event would be used to whitewash the Indian occupation of 700,000 troops & paramilitaries & human rights crimes which at that time included over 50,000 deaths, 8,000 disappearances, & hundreds of incarcerated. Activists said, quite rightly, that the concert would be used to render normality to a brutal military occupation.

Syed Ali Shah Geelani, an independence leader, said “We are under occupation. The majority of people here are suffering from state terrorism; people are being killed. People are suffering. There is no relevance for a music program. India, with the help of the German government, is trying to say the situation should be forgotten.”

Several activists, writers, academics, & religious leaders wrote to the German embassy in India asking them to cancel the concert. Their letter said, “Legitimizing an occupation via a musical concert is completely unacceptable. Art as propaganda, as abundantly documented, was put to horrific use in Nazi Germany. We are sure you will understand that we cannot welcome anything even remotely analogous in Jammu & Kashmir.”

The German ambassador replied: “Music is a universal language. Music connects. With the magic power of music, crossing geographical, political & cultural borders, we want to reach the hearts of Kashmiris with a message of hope & encouragement.”

That’s the same baloney peddled by Israel against the cultural boycott (BDS) asking musicians to cancel performances due to apartheid. It may not mean anything–but then again it may mean a lot given the military relationship & political affinities between Israel & India–that Mehta is associated with the Israeli Philharmonic Orchestra.

But even the sounds of Beethoven, Haydn & Tchaikovsky conducted by a world-famous conductor cannot drown out the voices of justice. Not only were there protests by activists against the concert but India had to beef up its security just to hold the damn thing.

It ended on a sour note when Nikolaus Bachler, the general manager of the Bavarian State Orchestra, learned the audience was only invited guests–business leaders, government officials, & diplomats. He said the 80 members of the orchestra waived their fees because they were under the impression they would be playing for the Kashmiri people & not at an elite embassy event with restricted access. Herr Bachler said, “We were misled by the German embassy. We will raise this issue with the German government that art can’t be exploited by anyone, be it governments or by embassies or any political groups.”

Don’t you just love it when chickens come home to roost!?

Photo is Mehta with the Bavarian State Orchestra at the Srinagar concert. Bravo to the orchestra & a Bronx cheer for Mehta.