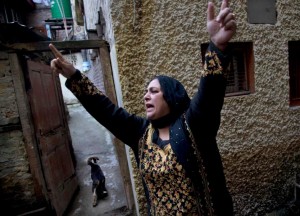 There might be a better way to win Kashmiri hearts & minds–like withdrawing the 700,000 troops & paramilitary thugs making it the most militarized region of the world & ceasing extrajudicial executions, disappearances, murders, rapes, kidnappings, torture, incarceration of thousands of activists.

But instead, in preparation for Modi’s speech on Saturday & to make him seem welcome, India placed Kashmiri independence leaders under house arrest, rounded up hundreds of activists on night raids of their homes & jailed them, & Indian troops stopped & frisked all vehicles entering Srinagar “for suspected militants.” Omar Abdullah, a former Chief Minister & a pro-India leader of Kashmir, denounced the arrests & tweeted, the “Srinagar rally will be historic–for the number of people arrested to make the rally possible.”

In an extraordinary, if not also inadvertent, admission, the head of police in Kashmir said the arrests were part of the “usual security drill” in Kashmir. “There’s nothing unusual about these detentions,” he said. It’s just the same old martial law India always enforces.

The venue where Modi will be speaking in Srinagar has been turned into a military fortress with battalions of police & paramilitary thugs patrolling & doing anti-sabotage duty in the area. Sharpshooters are positioned on high-rise buildings around the stadium & ‘intelligence sleuths will be keeping an eye on suspicious persons.’ That winning the hearts & minds thing doesn’t seem to be working optimally.

Several FB pages which promoted the million people march have already been shut down & the entire internet will be shut down during Modi’s visit. They can’t shut down those around the world who stand in solidarity with the people of Kashmir.

This is a Kashmiri woman shouting slogans after Indian police arrested an independence leader in Srinagar.

Our fullest solidarity with the people of Kashmir. End the Indian occupation.