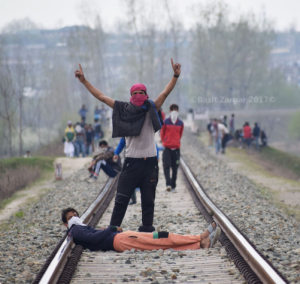 The general secretary of the BJP party in India (the political arm of the fascist movement) Ram Madhav announced that occupying forces in Kashmir will continue to rule with an iron fist. “We cannot allow militants & terrorists to have a field day, we will go after them with the utmost harshness.” Utmost harshness of course means tear gas attacks, shooting live ammunition at unarmed protesters, pellet munitions that will injure, blind, disable thousands more youth & children.

Showing the soft side of barbarism, Madhav continued: “At the same time, we have to win hearts & minds, we have to deliver development. Let me tell you, we are not against the Valley people. Were that so, we would have choked them. On the contrary we want them to prosper, & as the Prime Minister has said, tourism is the way, not terrorism.” Translated from the language of barbarism, that means we would have choked & killed them with our bare hands but we need those kids to work the ski lifts & carnival rides.

Madhav says the Indian occupying army expects the summer in Kashmir to be “relatively peaceful.” Relatively peaceful compared to what? To last year when the military went on another rampage that killed, injured, & disabled thousands? Or to the last encounter that killed three more unarmed civilian protesters?

This is a photo of Kashmiri youth protesting the killing of three civilians March 31st. Kashmir won’t be relatively peaceful again until India removes 700,000 soldiers making life in Kashmir a living hell.
End the occupation. Self-determination for Kashmir. Build international solidarity with one of the most intransigent & important freedom struggles.