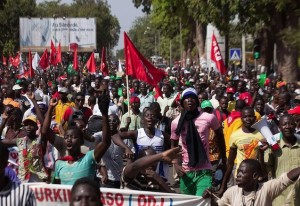 Bono & Bob Geldof have been excoriated (even if not enough) for their paternalist & white supremacist humanitarian aid campaigns for Africa. The same treatment needs to be accorded A-list Hollywood who make a seamless transition from strutting the red carpet to touring conflict zones in Africa not just touting humanitarian aid but US foreign policy in Africa. The list of movie stars playing great white savior is a mile long but George Clooney, Angelina Jolie, Ben Affleck, Matt Damon, Leonardo DiCaprio distinguish themselves in an unfortunate way.

Whether their concern is genuine isn’t relevant. What does matter is what political forces they ally with & what political agenda they promote for Africa. All of them are in league with the highest echelons of US government power–from the Council on Foreign Relations to the Pentagon & US Congress. Even their so-called humanitarian aid foundations are linked to US power.

Clooney operates in league with John Prendergast, a shadowy figure identified as a human rights activist in Africa but more likely a CIA operative who has numerous connections to US government agencies. The two frequently grandstand in Congress to testify for US military intervention in Darfur. Prendergast has a few foundations which media cite authoritatively on politics in central African countries. Last year, the Guardian reported Prendergast’s Enough Project (with links to the Clinton & Obama administrations & World Bank) declared the mines of DR Congo out of the control of war lords & the metals extracted conflict-free due to a US federal law passed in 2010. That absurd claim takes consumer heat off companies like Intel & Apple, leaves the mines in the hands of foreign mining interests strip-mining them for profit, & the continuing 17-year civil war inscrutable.

To promote US intervention in Darfur & other African countries, Prendergast, Clooney, Brad Pitt, Don Cheadle, Matt Damon, & other Hollywood hot shots formed Not On Our Watch Project. The Project gave half a million bucks to Oxfam in the Chad-Darfur region in 2008–a grant that likely involves less largesse than drawing NGOs into collusion in the region. It also provided seed money for the Satellite Sentinel Project founded by Clooney & Prendergast to do satellite surveillance of the region.

Jolie operates most often through the UN as a goodwill ambassador. Most recently (2014) she collaborated with William Hague, then a British Secretary of State, about the use of rape as a weapon of war, especially in DR Congo. She also frequently tours refugee camps in Africa–without ever bringing an iota of insight to what is causing the mass rapes or the refugees. One could claim that humanitarian aid is above politics except that such a distinction is entirely false. And Jolie as a member of the Council on Foreign Relations knows that. One of her frequent collaborators in the field is the International Rescue Committee, Kissinger’s group which is funded over 50% by the US government.

Affleck formed his own foundation, the Eastern Congo Initiative (ECI) in 2010 focusing on DR Congo which allows him to promenade media & testify in Congress as an expert on Africa. The co-founder of ECI is Whitney Williams, who also set up Matt Damon’s foundation for Africa. Williams is a humanitarian aid consultant with links to the Clintons, USAID, the Gates Foundation, the International Rescue Committee, John Prendergast & the Enough Project, & Bono’s foundation ONE. In 2011 ECI & the Enough Project jointly called on the US to intervene in DR Congo around elections. It’s all of a piece & not just of noblesse oblige but to serve US foreign policy & neoliberal plunder.

This narrative of Africa as a continental basket case of war, genocide, & famine is curiously at odds with investment agencies promoting foreign direct investment (FDI) in Africa. Since the late 1990s, the UN, World Bank, other investment groups, & Forbes magazine have issued regular reports that rue the lack of FDI & promote African countries as among the fastest growing economies in the world. In fact, in that period FDI grew from $9 billion to $62 billion, mostly in the mining industries. In a recent list the World Bank listed the DR Congo as among the top six African economies. The DR Congo has been in a 17-year civil war with over four million civilian deaths & is occupied by UN troops. How the hell is economic performance calculated?

Mauritius, a small island country off the east coast of Africa, is held up by the World Bank & economist Joseph Stiglitz as the “Mauritius miracle” & among the top forty best economies in the world for doing business. What price glory! Sweatshops where workers earn pennies an hour, sleep 16 to a ward, have no labor rights; child labor; child prostitution for the tourist industry; sky high property costs so most workers can’t afford homes or rent.

Investment bankers project growth in Africa from a US $ 2 trillion to a $29 trillion economy by 2050 but their measure of growth & that of Africa’s working people is entirely different. A couple years ago the African Development Bank (a major player in all this) issued a report on Africa’s growth touting the extraction of oil & minerals as the primary source of economic growth. They didn’t elaborate that much of this depends on the dispossession of small farmers & the use of child labor. They reported major inroads into poverty so that those living below the poverty line of US $1 a day has fallen from 51% to 39%. They gloat that now 350 million Africans (out of 1.11 billion) earn between US $2 & $20 a day. $730 or $7,300 a year is nothing to gloat about. They never addressed the estimated one million African refugees every year making arduous treks to Europe, Saudi Arabia, Israel, & elsewhere seeking asylum & economic opportunity.

Foreign investment is in fact draining Africa of resources. An estimated $134 billion flows into the continent each year, in the form of loans, investment & aid, but an estimated $192 billion is taken out, mainly in profits made by foreign companies. The result is that Africa suffers a net loss of $58 billion a year. That’s called plunder.

There have been popular uprisings in nearly 30 countries against pauperization & neoliberal plunder. These are seldom reported because they are at odds with both the basket case narrative about Africans & the promotion of FDI. These aren’t just spontaneous inchoate uprisings but involve political groups with explanations for the neoliberal devastation in their own countries. In the period after independence from colonial powers & before the onset of neoliberal plunder, there was considerable economic & social development that is being reversed. It is in these rebellions that the future of Africa lies–not in movie stars with white savior complexes.

Last fall, uprisings in Burkina Faso in western Africa deposed the president who was one of Africa’s longest serving leaders. Hundreds of thousands protested to stop him from running for a fifth term & after months of protest, he fled the country in October. This photo is of a protest in the capital Ouagadougou.