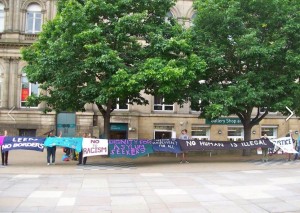 No Borders Leeds, an immigration rights group in Leeds, England held a “Freedom not Frontex” protest yesterday. Frontex is the European Union agency that maintains the surveillance system of Fortress Europe & is responsible for the deaths of thousands of immigrants.

The European Summit on Migration is being held now in Brussels (June 26-27th) where they will devise yet more treacheries to keep immigrants out & to go after undocumented immigrants within Europe. So a coalition named Freedom not Frontex put out a call for action in defense of immigrants across Europe & organized a 40-day caravan starting from Strasbourg & ending in Brussels today. The Leeds protest was a response to that call.

Protests in defense of immigrant rights don’t make the news very often but these acts of solidarity are the heart of reversing the racism & xenophobia we are fed in a steady stream of propaganda. In place of politicians calling for deportation & hermetically sealing the borders, immigrant rights activists chant “No human being is illegal!”

Italian immigration rights activists joined with immigrants in protest when 364 African immigrants died last year off the coast of Lampedusa, the island with a refugee processing center. That is the kind of solidarity that can not only make immigration a human right but that can change the world.

No human being is illegal! Immigration is a human right!