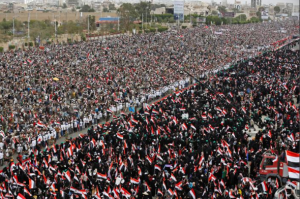 Casualty figures are now reported at over 10,000 but given the international monitoring systems in place for civilian deaths, that estimate is mostly a shot in the dark. Since civilian areas, including schools, hospitals, residences, mosques are being directly targeted, the actual number of deaths is probably considerably higher.
There are 40,000 who have been reported injured–some of course with incapacitating, permanent disabilities. Over 3 million have been displaced & made homeless & the country is sustaining widespread famine.

Like the US occupation of Afghanistan in 2011, the reasons for the bombing campaign shift & morph until now it is reported to be about the Houthis & the guy who’s president. In fact, it is about the complete destruction of the spirit of the revolution which began just over 6 years ago & was one of the most remarkable uprisings the world has seen in decades.

Judging from this protest yesterday, two years of bombing has not daunted the spirit of resistance, so profound is the hatred for tyranny & the desire for freedom.

Our deepest respect & fullest solidarity with the Yemeni revolution.