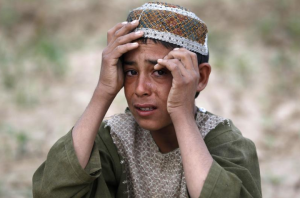 It’s really swell that Human Rights Watch is lobbying the Pentagon to review its measures for civilian protection in Afghanistan–especially after the US dropped the nearly 11 ton “mother of all bombs” in April.

In their report, HRW said casualties in Afghanistan are steadily rising & in 2016 were the highest recorded since 2008 with 3,948 civilian deaths & 7,920 injuries. Of course, civilian death estimates are always conservative & injuries is a term that covers life-altering incapacities like lost limbs, concussions, shattered bones, shrapnel that cannot be removed, infection & sepsis. Not to mention PTSD from nearly 16 years of war trauma or massive social dislocations like homelessness, child labor, millions of refugees (including to Europe where they are denied entry).

So why can’t a human rights organization bring itself to condemn the US war in Afghanistan? Why does it stop at calling for better measures to conduct war when there is no good way to do that?

This photo of an Afghan boy is quite dated because there is no recent photojournalism covering the Afghan war as part of the news blackout. It’s a consequence of journalists being embedded with the military.