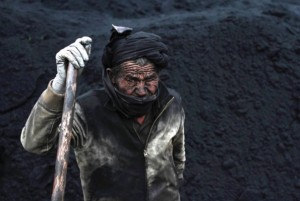 When we read about the US-NATO mission in Afghanistan, which gets improvised & modified every so often, we wonder how that emancipation of women thing is going. After they set up the vaunted nail salon in Kabul have there been any other developments? Have Afghani women objected at all to having their homes, schools, clinics, mosques, fields bombed & their families killed now that they can get their nails done?

Apparently the marines have been so busy with that salon & facilitating drug trafficking they haven’t gotten around to dealing with barbaric labor conditions. But what’s emancipation for if not a manicure!? Part of the war propaganda is demonizing Afghani men & we get the full panoply of charges: honor killings, child brides, forced marriages, women as chattel. And that’s supposed to make us want to bomb them.

Well take a look at this fellow, a coal miner at a dump site outside Mazar-i-Sharif, & see if you’ve got it in you to take a drone after him. Or if instead you identify with him as a human being & fellow worker subjected to unspeakable labor conditions & exploitation.

Get a gander of the safety equipment he is wearing. Nada, zip, nothing–nearly 200 years after doctors identified the causes of black lung disease. It is caused by inhaling coal dust. It is debilitating, often fatal, & there is no cure. According to two centuries of substantial data, people in coal mining communities have increased risk for many chronic illnesses, skin disease, kidney disease, chronic obstructive pulmonary disease (COPD) such as emphysema (that means they can’t breath), fibrosis & necrosis of lung tissue, high blood pressure, high mortality rates. All these health threats to people with little access to health care, eating inadequate diets, living in poor housing conditions, & living in a war zone.

Of course, in the US–the valiant emancipating country–black lung disease still kills over 1,000 coal miners a year; in China it kills over 6,000 miners a year. And when you include the death figures from the many other countries engaged in barbaric mining practices, you’ve got quite an indictment on your hands. Black lung cases in the US have more than doubled in the past 15 years because safety laws have been strip mined in the interests of increasing production. Coal mining isn’t just dirty energy; it’s dirty business all around when you subject millions of workers to health problems & premature death.

But hey, in Afghanistan, the men are a piece of work–not at all like the US marines sent to liberate the women. Those soldiers only rape, torture, massacre, mutilate & piss on corpses in the interests of freedom & under the banner of democracy. Too bad the women can’t hear the “Battle Hymn of the Republic” over the sound of drones. But at least they have their nails done.