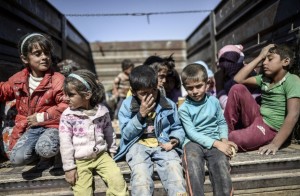 While the odious Clintons celebrate the new kid, these Syrian children are fleeing from US carpet bombing. Until the current US bombing of Syria, most military aid was given to paramilitary groups fighting the tyrannical Assad regime.

Hillary Clinton, in her bid to be chosen presidential candidate, is attempting to distinguish her policies from Obama by moving more to the right on Syria as well as other conflicts. Bill Clinton publicly & fully supports her barbaric perspectives. Stand with the children of Syria by marching against US war in Iraq & Syria.

US out of Syria! End the bombing!