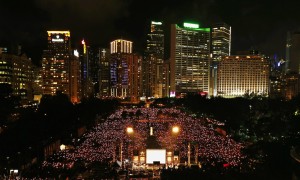 This is the scene today in Hong Kong’s Victoria Park where an estimated 180,000 people gathered for the annual candlelight vigil commemorating the 25th anniversary of the crackdown in Tiananmen Square & repression of the democracy movement which engulfed all of China in 1989.

The article linked here says Victoria Park is the size of six football fields which may not say much to those outside the US but as you can see from the photos, it means mighty big.

The most inspiring thing about this photo is witnessing the power of the democracy movement to inspire younger generations. Like the US Civil Rights Movement of the 1960s, it stands as a beacon to suffering humanity. The fact that the movement was violently repressed has not daunted the spirit of rebellion or the desire for human rights but continues to light the way in the annual candlelight vigil.

Our fullest solidarity & respect with the movement of 1989 & with the democracy movement today.