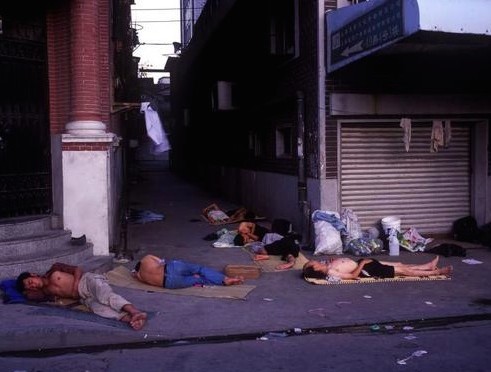 Homeless in Shanghai, China: There’s an entire bible of aphorisms on how to judge the character of a society. The touchstones include the treatment of women, animals, & the weakest (defined as children, elderly, & those with disabilities). Malcolm X, Gandhi, Einstein, Mark Twain, Dostoyevsky, & umpteen others have all weighed in; no less a bonehead than deceased US vice-president Hubert Humphrey made his own pithy contribution. Chances are if a society is abusing any of these groups, there’s a whole raft of policies it can be damned for, making the pithiness nothing more than pieties. One would hope the few extant socialist societies would measure well on these standards against capitalism in its barbaric phase. But China, in particular, appears to be racing neoliberalism to the bottom.

Since the Chinese Revolution in 1949, the country has been engaged in what is called the most massive urbanization in human history involving the relocation (& often forcible dispossession of lands) of millions of rural residents to find work in the cities. This is a wrenching dislocation since an estimated 61 million children live apart from their parents in rural China while their parents stream into urban factories looking for work. China plans to create 400 new cities by 2020 to cope with this urban growth. (Whether they’ll be affordable is another question.) Part of urban development schemes in the major cities is also a building boom of skyscrapers–a building boom involving the forcible eviction in the past decade of an estimated 4 million people from old tenements to make room for luxury high-rises.

Estimates of homelessness in any country are completely unreliable not just because it is difficult to assess but because governments have a vested interest in lowballing the problem. That would be especially true of a country purporting to be socialist. Then there are those with right-wing agendas who want to exaggerate the problem. One source claims China had 2.41 million homeless adults & 179,000 homeless children in 2011. Another source claims 200 million adults, & 4 million children. Neither seems at all credible but even the lesser estimate is completely unacceptable in any society. In a society claiming to be socialist, it’s a travesty.

Many attribute most of the homelessness to the hukou system instituted in 1958, an abomination if there ever was one. Hukou is a system of residency permits & a method of social control registering people in their birth provinces, limiting their social benefits to that province, & restricting rural to urban migration within China. In essence, it’s an internal passport system which creates discrimination against rural Chinese. Those who migrate to cities are not eligible for basic welfare & social service programs, including public education. But they are subject to super-exploitation by employers in the same way as undocumented immigrants in Europe & the US.

Hukou is absolutely implicated in the level of homelessness in Chinese cities. But so are the forcible evictions of urban residents to make room for skyscrapers–especially as there is no mention of massive public housing projects. The Chinese government also has a different standard for poverty than the World Bank figure of US $1.25 a day. China is shamefully even stingier with a poverty line of US $1.00 a day. The Economist magazine did its best to parse that figure, claiming it has purchasing power of $1.83 in the US but no matter how you shake those pennies, it’s all chump change. While we’re at it, we should mention the wages in relation to rents: in Shanghai, the average rent for a one bedroom apartment goes from US $525 to US $960. At the Chinese poverty rate, you won’t soon see housing & starvation is a very likely possibility.

For those who think this too harsh on China, who want to blither on about the difficulties of development, please explain why China is lending the US trillions for war rather than investing millions in public housing?