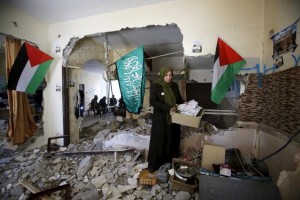 The Reuters caption to this photo generated quite an uproar in Zionist media after CAMERA, a pro-Israel media hound dog, objected to its veracity.

The caption on March 31st read: “HEBRON, Palestinian Territories;
The mother of Palestinian Ihab Maswadeh inspects belongings after their family house was partially demolished by the Israeli forces in the West Bank city of Hebron March 31, 2016. According to the Israeli military, Ihab Maswadeh was shot dead by Israeli troops after he attempted to stab an Israeli soldier last December.”

CAMERA, who conducts its activity in the deranged genre, made a stink with Reuters, saying that young Maswadeh did not attempt to stab an Israeli soldier but actually fatally wounded an Israeli settler working as a gardener near the Cave of the Patriarchs. CAMERA doesn’t explain how it knows more than the Israeli military that shot Maswadeh dead.

We could go back & forth with CAMERA till the cows come home. They claim Reuters issued a correction to the original caption but it is as yet no where to be found. Actually, it’s fairly irrelevant whether it was a soldier or a settler since most of those settlers are armed to the teeth & aggressive as hell against Palestinians.

We won’t bring up that the Cave of the Patriarchs is a Muslim holy site which Israel is trying to claim & expropriate (as it does the Al-Aqsa mosque) as a Jewish holy site; we won’t refer to the 1994 massacre at the site by Israeli settler Baruch Goldstein which killed 29 Palestinian worshippers & wounded 125 others; we won’t even bring up the arrant horse manure of claims that Palestinians are being shot after stabbing attempts when it is clear they are being summarily executed.

We just want to focus on the issue depicted here: that Israel, which executed young Maswadeh on the spot & denied him due process for their lying-assed accusations, punishes his surviving family by demolishing their home. Where is the precedent for that in law? How does Israel justify making a family homeless because of unproven allegations against one of the family members?

Didn’t Israelis just put up a collective howl of approval for the soldier who shot Palestinian Abed al-Fatah al-Sharif in the head when he was already shot & lying on the ground incapacitated? Does the rule of law exist at all under Israeli military occupation? Or is it just barbarisms of all kinds justified by some fictitious Old Testament claim to Palestine?