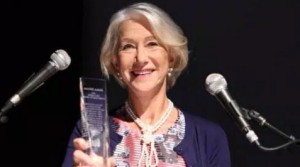 Some people will do anything to grab an honorific but actress Helen Mirren waxed genuinely enthusiastic about Israel when she was feted with a career achievement award at the 29th Israel Film Festival in Beverly Hills on Wednesday.

In her effusive speech declaring love for Israel, she said she worked on a kibbutz after the 1967 war & attributed her acting success partially to Israeli influences. She praised the developing Israeli film industry so perhaps she figures she can get work there when Hollywood has cast her aside as too old. Or she’ll be good in propaganda films making apartheid & ethnic cleansing look stylish.

Shame on Helen Mirren. She has access to the same sources of information as the rest of us & has to answer for her support to apartheid & ethnic cleansing.