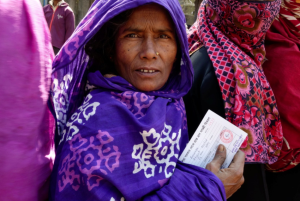 The dead giveaway of stinking rotten politics permeating the rantings of fascists, Zionists, Assadists, Hindutva & Burmese nationalists & all other debased ideologies: hatred, cynicism, animosity, misanthropy in the form of racism & misogyny. This stunning photo of a Rohingya woman taken in Cox’s Bazar last March was posted by a Burmese nationalist nimrod on a post by Maung Zarni with a demeaning comment about seeing her naked. Hate & disrespect are the essence of such politics. The politics of social transformation are based on the highest regard for human life, a belief in the sacredness of human life. To us she is beautiful beyond words.