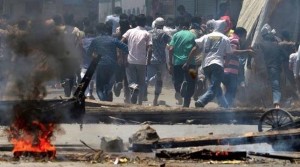 If by world one means the UN or human rights groups like Amnesty International & Human Rights Watch, then yes, they’re no where to be found right now in exposing or denouncing the siege.

If by world one means human rights activists in India & around the world who are coming in large numbers to understand the character of India’s occupation & organizing forums & rallies against it, then no, something there has fundamentally changed in favor of justice.

As for that “international community” stuff, such a thing has never existed, especially since the hegemony of capitalism which is a competitive system recognizing no affinities between human beings if they cannot be exploited.