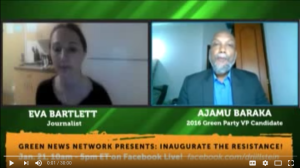 Eva Bartlett’s recent interview by Ajamu Baraka of the Green Party is being circulated on YouTube by the Hands Off Syria coalition. How shall we politically describe that coalition without resorting to sarcasm & ridicule when its members took a whirlwind tour to Syria guided by Bartlett & Beeley, met with Assad & came back with glowing reports of his dictatorship? He & Asma Assad are so western & so haute couture that it didn’t seem prudent to ask about the gulag, the mass graves, or the carpet bombing of civilians.

Can we not beat around the bush with false diplomacies & just say outright that the Hands Off Syria coalition is a sorry-assed amalgam of Stalinists who worship Stalin & deny his crimes; David Icke libertarians like Bartlett who believe reptilian Jewish bankers are trying to create global fascism; & dried up little socialist factions who want a regime they can hold on to in a cold cold world & call their very own.

Bartlett & Beeley are feeling the heat of exposure for being toured & feted in Syria always in the company of Assad officials & Syrian army security & want to assert their status as independent journalists rather than on-the-take propagandists. So Baraka, the eminent confusionist & compromiser has become part of a campaign to salvage their unsavory reputations as the Ann Coulter & Leni Riefenstahl of the Assad regime. Bartlett told Baraka we are not hearing Syrian voices in this debate without mentioning that her primary mission has been to vilify & discredit them all as “head-choppers.”

It took a while to figure out why Icke & his two disciples would get so actively involved in Syrian politics along with fascist groups from around the world & supremacists like David Duke of the KKK. If took some study to understand why Islamophobic hating & hysteria combined with pernicious anti-Semitic currents in the vitriolic writings of Assadists. But if one examines the history of persecution against Jews under the rule of Hafez Al-Assad one can see the pole of attraction for fascists & their libertarian allies.

Jews under both Assads were massively discriminated against & not allowed to travel outside the country; they were treated the same as in Russia under Stalin. In 1992, when the senior Assad allowed them exit visas, 4,500 of them fled to other countries. As of November 2015 only 18 Jews remained in Syria though there are no estimates of how many remain in Assad’s gulag.

For libertarians who accept & do not oppose capitalism & who see reptilian Jewish bankers as the root of all evil in the world, Syria must seem the ideal launching pad for their grotesque dystopia of a society rid of all Jews, all Muslims, & let’s be frank, all dark-skinned people. That’s what makes the political views of Ajamu Baraka on Syria not just odious but pathetic.

Stay away from the Hands Off Syria coalition which promotes Islamophobia & anti-Semitism in its charter. Its members have gone over to the dark side & most will not be coming back.