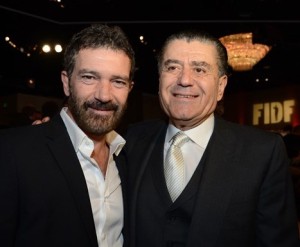 Haim Saban (on the right) is a guy we should all get to know since he plays quite a pivotal role in US politics. He has dual citizenship with Israel & calls himself a one-issue guy whose mission is to influence US politics favorably toward Israel by donations to political parties, setting up think tanks (i.e., propaganda machines), & controlling media outlets. Since he’s a billionaire whose politics correspond with those of the US government, he’s been quite successful at all that.

He made his fortune as a producer of children’s television in Hollywood. Power Rangers is just one of his many productions. He now owns Univision, the main Spanish-language network in the US. From that perch, he can do a lot of damage to Palestinian justice among Latino Americans–& he intends to.

His financial contributions to the Democratic Party & to the Clintons go back decades. He’s poured millions of dollars into the coffers of both Clintons & the Clinton Foundation. That partly explains her shameless groveling in the love letter to Israel that she published last week titled “How I would reaffirm unbreakable bond with Israel–& Benjamin Netanyahu.” She said “The alliance between our two nations transcends politics” & claimed Americans believe “Israel is more than a country–it’s a dream.” When big money is at stake, no sentimental drivel is too unseemly for this war criminal without an ounce of human compassion. Even Obama hasn’t stooped that low.

Our man Saban is the prime mover behind Friends of the Israel Defense Forces (FIDF), a nonprofit organization founded in 1981 that operates 15 regional offices in the US & Panama. They claim their purpose is charitable support to IDF soldiers & veterans. For the ninth year in a row, under the aegis of Saban who has connections in Hollywood & the entertainment industry, FIDF sponsored a gala fundraising event (on Nov 8th) in Beverly Hills for film industry moguls & movie stars & other elite moneybags. The event raised $31 million. A similar FIDF event at the same time In NYC raised $24 million. The regional offices all held fundraisers that raked in several million more.

All of the nearly $60 million raised for FIDF is tax-deductible although the programs it sponsors are associated with the Israeli military & are not just a charitable adjunct to it. Consider what would happen if the Indian or Pakistani militaries (both US allies) or the Japanese or Ukrainian governments or any other regime set up tax-exempt front groups in the US to raise money. They would be legitimately denied nonprofit status.

The tax-exempt status is one way we know the politics of Saban & the FIDF are in accordance with US policies for Israel & the Palestinians. They are not driving US government policies so much as profiting from it & strengthening its hold in Hollywood. The money they raise is a propaganda supplement to the billions the US Pentagon dishes out to Israel for armaments.

Good to know all this; unwise to be daunted by it. It only makes our work of building BDS, the boycott of Israel (barcode beginning 729) more imperative. The bigger they are, the harder they fall. Ask the Vietnamese about the impregnability of US military might. The Palestinians have stood alone against all this for nearly 68 years. It’s time for the big battalions of international solidarity to arrive.

Photo is Antonio Banderas the dope on the left & Haim Saban on the right.