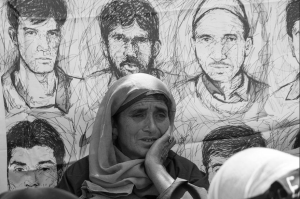 A grieving mother standing before photos of the forcibly disappeared at a protest in Kashmir:

The Association of Parents of Disappeared Persons (APDP) in Kashmir estimates that between 8,000 & 10,000 people have disappeared in Kashmir since 1989. Young & old were picked up, interrogated, starved, beaten, tortured, & thousands ended up in mass graves.

Disappearing is a crime of incalculable measure, leaden with grief that can never be resolved nor forgotten. Photo montages of the disappeared are a feature of families protesting the disappeared going as far back as those disappeared under General Franco in the Spanish Civil War of the 1930s.

Kashmiri activists, most notably Parveena Ahangar, a co-founder of APDP, & Khurram Parvez & Parvez Imroz from the Jammu Kashmir Coalition of Civil Society (JKCCS), have educated many around the world on the importance of this issue in nearly 50 countries who employ disappearing as a weapon of social control & repression.

This is a quite interesting article about a 2017 calendar put out by APDP which has a photo & story of one disappeared person every month. The article has photos of the regular APDP protests.