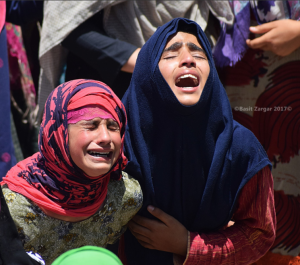 Indian police claimed young Tawseef was a “chronic stone pelter” who had been involved in 10 stone pelting cases since 2010 & was previously booked twice under the Public Safety Act (PSA). That would mean he had been stone pelting since the age of 15. That would make him a very courageous young man & a great loss to the Kashmiri freedom struggle.

The PSA is a draconian measure to repress dissent, victimize youth, & give impunity to the occupying army. In an ugly irony, it developed out of British efforts to repress the Indian struggle for freedom from British colonialism.

There were three militants killed in the same encounter. Their faces were draped at their funeral prayers because they had sustained serious burn injuries. The funerals of Majid Mir, Shakir Ahmad, & Irshad Ahmad were attended by thousands.
May the four young men Rest In Peace.