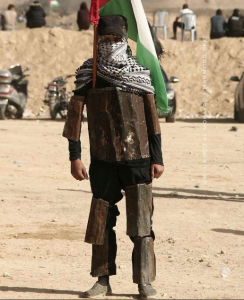 Palestinian protester in homemade protective gear to participate in unarmed, peaceful protest yesterday in Gaza for the right of refugees to return to their homeland: nine Palestinians were killed yesterday & over 500 were injured by Israeli occupying troops. In another expression of its moral & political bankruptcy, the UN called on both sides not to use violence though only one side is armed & shooting.

What’s noteworthy is that media coverage of the protests were not as hateful toward Palestinians as usual. One can hardly call the reports fair & balanced but at least they reported that Israel is shooting at unarmed protesters. Of course, it also had to raise the boogieman specter of Hamas terrorism, even though Hamas is the elected government of Gaza.

Stand with Palestinians in their fearless campaign to win the right of return for millions of Palestinians still living in refugee camps.