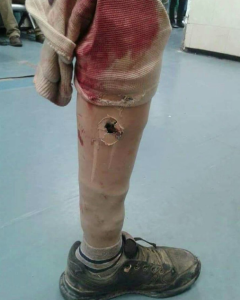 This photo is an amputee, almost certainly from one of Israel’s bombing sieges over Gaza, who was again shot in his artificial limb during the Great Return March yesterday. The young man is suffering injuries from the bullet & must be reliving the horrors of the original amputation.