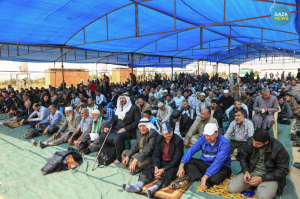 Gazan medical officials report that the number of injuries today at the Great Return March from live ammunition & tear gas bombs has risen to 363, including two journalists & 14 paramedics. Since the Great Return March began three Fridays ago, they report that 34 Palestinians have been killed & over 3,000 injured. One of the journalists shot by Israeli snipers today named Ahmad Abu Hussein was wearing a clearly marked press vest & is reported in critical condition.