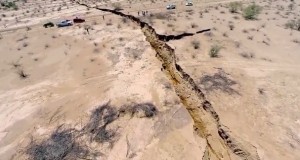 This 3,300 feet long & 25 feet deep (one kilometer & 8 meter) chasm opened last August in the desert outside Hermosillo, Mexico in the state of Sonora (on the US border with Arizona). The Washington Post published an article claiming “scientists” said it was nothing to sweat about. Turns out the “scientists” are just one guy who chairs the geology department at the University of Sonora named Inocente Guadalupe Espinoza Maldonado. Professor Espinoza called the chasm a “topographic accident” & “no cause for alarm” because “These are normal manifestations of the destabilization of the ground.” He might reconsider that judgement if it went through his living room or interrupted one of his lectures.

He considered it unlikely to be tectonic or seismic activity & more likely due to decades of over-pumping groundwater for agricultural irrigation which caused the surface to collapse. He claimed large-scale agriculture is going on in the area of the fault though you wouldn’t know it from this picture. There isn’t a shrub in sight.

It well may be from excessive extraction of water & intrusion of saltwater from the nearby Gulf of California, as the good professor claims, but that sure as hell is not “normal” or “no cause for alarm.” As we can see in this video, the fault went right through a highway. He might enlighten the residents of Hermosillo by explaining if local geologists were monitoring the situation & warning public officials that faulty irrigation methods could cause “topographic” problems. It would also be important for him to explain how the August 6th mining spill of copper sulfate acid into the Sonora River 183 miles (294 kilometers) upstream interacts with all this. The Sonora River supplies water to nearly one million residents of Hermosillo & hundreds of thousands of people along the river & empties into the Gulf of California. Upstream the water is orange, mucky, undrinkable, & unusable in every other way. And it’s likely to stay that way since the mining company & Mexican government are colluding & obstructing cleanup.

There is crescendoing alarm about the relationship of fracking, sinkholes, & earthquakes & the connection of all that to climate change. These are important questions that cannot be left to conspiracy theorists & other crackpots. Responsible geologists & other scientists cannot be cavalier because people are asking serious questions involving the survival of the human race. The planet will survive neoliberal depredations. The question is, will we?

(Photo is screen shot from video of Sonora fault. Please view the brief video to see how scary the damn thing is.)