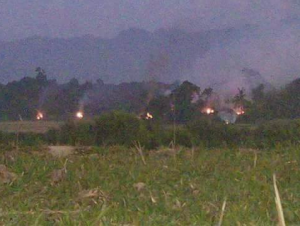 Ziaur Rahman, a Rohingya refugee in Malaysia & Jannatun Nayeem Nayeema, an activist in Bangladesh are reporting that the Burmese military are conducting helicopter airstrikes to destroy Rohingya Muslim villages in Arakan state.

Human rights activists around the world must respond to the appeals of Rohingya activists, many in exile, & begin to organize a solidarity campaign to demand the end of genocide against our Rohingya brothers & sisters. We can begin by contacting Myanmar embassies & our own governments to demand they stop the bombing.