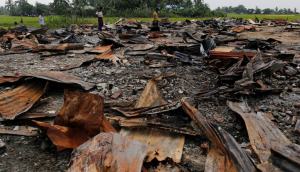 The Myanmar government–which is really the military junta hiding behind the human rights facade of Aung San Suu Kyi–claims legions of Taliban-trained Rohingya “jihadists” are behind the fatal killings of border guards on October 9th.

It is absolutely certain the government did not determine that in the investigation that Suu Kyi promised at a press conference. Because within hours of the attacks on the border guards, the military declared Arakan State an “operation zone” & put it under martial law lockdown.

The Myanmar army & border guard troops began moving into villages on foot & by air searching for “terrorists” & rounding up all men & boys as suspects in the raid & shooting them. The military has blocked access to foreign human rights groups & most journalists so the UN claims allegations by Rohingya human rights groups are hard to verify. Yeah right! Is there any reason they would lie?

According to Rohingya activists in Arakan State, troops are shooting down unarmed civilians in the streets in extrajudicial executions; raping women; torching homes, mosques, entire villages; arbitrarily arresting hundreds; forcibly evicting people from their homes. An estimated 15,000 Rohingya have been displaced & are fleeing the assaults. Entire villages are deserted. The military has also stopped aid deliveries to hundreds of thousands of people.

The army claims that in defending themselves from attacks, soldiers killed 33 Rohingya. Residents & rights activists claim scores more of unarmed civilians have been executed.

A spokesperson for the president of Myanmar claimed Rohingya were simply fabricating the allegations as part of a propaganda campaign led by the “jihadist” insurgents who he compared to ISIS & al-Qaeda. The police chief of Arakan State dismissed the allegations as “propaganda for Muslim groups.”

Reuters reporters who were allowed to enter the martial law zone claimed they passed villages where homes were torched. They also interviewed women who described their rape by soldiers. It’s not certain why the photographers saw this rubble of a torched marketplace outside the village of Maugndaw more compelling documentation of genocide than the torched villages. Perhaps they were under army surveillance.

Almost all media accounts of the genocide against Rohingya call it “communal violence” between Rakhine Buddhists & Rohingya Muslims or they refer to it as “unrest.” If it’s religious or cultural conflict, why is the Myanmar military conducting the violent campaigns against Rohingya & inciting rightwing Buddhists to join in? Why are Rohingya forced into concentration camps but not Buddhists? Why have 120,000 Rohingya attempted to flee on boats in the past three years while there is no report of Buddhist flight?

One thing is certain: the use of Islamic fundamentalism or “jihadist” insurgency as an excuse for military intervention–whether in Myanmar, Iraq, Syria, Afghanistan, or elsewhere–is a political device to justify war, genocide, occupation. It must be rejected & opposed.

End the genocide against Rohingya. Open the borders for Rohingya refugees.

Our fullest solidarity with Rohingya Muslims.