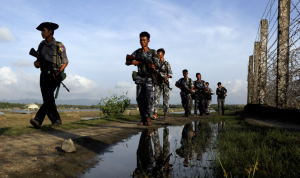 There’s been a genocidal onslaught against Rohingya in Arakan (Rakhine) state since October 9th when unidentified assailants killed border guards on the border between Myanmar & Bangladesh. Were it not for Rohingya sources of information, we would have little idea of the scope & barbarity of the military occupation.

That western media which bothers to report the military onslaught frames the genocide in terms of the Burmese military & the regime of Aung San Suu Kyi: there are “clashes” & a “resurgence of violence” between the Burmese army & “Rohingya Muslim militants,” an ‘insurgent group of Rohingya believed to have links to Islamists overseas’—the all-purpose Islamophobic justification for slaughter, from Myanmar to Syria.

It’s also framed as communal conflict between Buddhists & Rohingya in Arakan state—or as the Guardian-UK states it: “The state has sizzled with religious tension ever since waves of violence between the majority Buddhist population & the Muslim Rohingya killed more than 200 in 2012.” The Guardian doesn’t need fact-checkers; it needs to pull its head out of the Burmese junta’s ass.

The military has blocked access for journalists & aid workers to Arakan–which does not explain the rubbish they report because the genocide against Rohingya is documented by the most authoritative international humans rights organizations & by Rohingya human rights advocates. Human Rights Watch has high-definition satellite imagery showing widespread fire destruction of Rohingya villages including hundreds of buildings. If media wanted to report honestly, it could easily access those images instead of reporting what the Burmese military says. We certainly hope the “see no evil, hear no evil, report no evil” Kofi Annan commission will take a look at those images for its report to Suu Kyi on development in Arakan.

Since October 9th, the Burmese military has poured into the state by land & air. There are credible reports that the military armed Buddhist nationalist civilians to participate in the genocide. They stand accused of summary killings, rape & sexual violence, torture, arson & the wholesale destruction & plunder of Rohingya properties, homes, religious buildings, & villages in Northern Arakan.

The military is using helicopter gunships, tanks, artillery. There are reports that whole families have been shot dead. reports that those fleeing were gunned down by machine guns. But media like Reuters, the Guardian, & Associated Press report that as army troops returning fire against insurgent attackers with links to “foreign Islamists” & “mobs wielding small guns & swords.”

According to Rohingya media, between October 9th & November 13th, an estimated 350 have been killed, including women, children & infants, elderly; 300 injured with no access to medical care; “many dozens” of women raped; hundreds arrested on false charges; at least 30,000 internally displaced; 3,500 houses, including 4 villages, were torched & burned to the ground.

This is a time for solidarity, not just to stand with Rohingya in our thoughts & prayers, but to rally where there are Myanmar consul or embassy offices, to contact the Suu Kyi regime by email or phone, & to protest to our own governments which have considerable investment in Myanmar & are complicit in this genocide.

Photo is Burmese troops patrolling the border between Myanmar & Bangladesh.

Those who want follow events in Rohingya media can go to: https://www.facebook.com/KaladanPressNetwork/?fref=ts