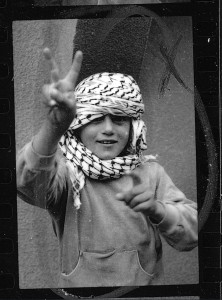 From the annals of Palestinian Intifada, Gaza 1988: when Israeli tanks entered Gaza on their murderous mission in July 2014, soldiers gave the “V” sign long associated with peace, not ethnic cleansing. We think now it must have been an unintentional sarcasm. This young boy is from Intifada 1988 in Gaza.

Israel targeted children during that rampage also; 241 of the 1,204 killed were children but hundreds of kids were beaten, tear gassed, shot at, & jailed. One NGO estimated “23,600 to 29,900 children required medical treatment for their beating injuries in the first two years of the intifada”. One-third of these were children under the age of ten.

Images from the First Intifada show many children giving the “V” sign. The photojournalist who took this photo said “”Wherever I went in the West Bank & Gaza Strip in 1988, Palestinian children spontaneously gave ‘V’ signs in response to my camera.”

It’s this tough-minded resolve that makes the Palestinian struggle a beacon for suffering humanity everywhere & an inspiration to those who have not yet acted in solidarity.

Boycott all Israeli products (barcode beginning 729); demand “No military aid to Israel!” Keep the pressure on!