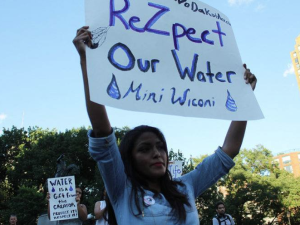 It wasn’t until the civil rights movement of the 1960s that US history began to acknowledge this country was built on the ruthless extermination of Native Americans though till today that history is excluded from school text books & what we are fed is maudlin & racist mythology.

Genocide is not one of those things that passes through history without leaving profound discordancies & social wreckage–not just on those who were the victims but on the perpetrators. Societies of the latter develop psychological mechanisms to distort & deny genocide. One peculiar manifestation of that in the US is “playing Indian”–from the attire at the Boston Tea Party, rituals of the Boy Scouts & fraternal organizations, the names & mascots of sports teams, the names given military operations & fighter planes.

After the Civil War, President Abraham Lincoln commissioned former Yankee generals to lead the wars of extermination on Indian tribes of the Plains regions. By that time, the wars of extermination had mostly ended east of the Mississippi. By the early 20th century, most of the Plains tribes from the Canadian to the Mexican borders had been massacred, defeated militarily, driven on to reservations as defeated peoples.

Anthropology museums were being developed then to house the artifacts of defeated tribes throughout the Americas. The elites who bankrolled the museums, like J.P. Morgan, commissioned photographers to go west & document Native American tribes for the historic record before they went extinct–which they were expected to do on the reservations.

Those photographers confronted the reality of traumatized survivors of genocide living in squalor on reservations. The photos they took, though magnificent, were staged, glorified images of Indians & integral to the process of denying genocide–so that generations would be deceived by what had really happened, by what our ancestors had participated in, by what this country was built on.

The top photos here of Sioux chieftains were taken in the era of anthropological images. Until the civil rights movement, Indians who lived on reservations near state parks in Minnesota & probably elsewhere would attire in the same way to work in the parks “playing Indian” & selling American flags on a stick.

The bottom photos are Standing Rock Sioux activists in North Dakota opposing the Dakota Access Pipeline. All over the Americas, indigenous tribes are leading struggles against neoliberal economics & the destruction of the environment leading to climate change.

Who could have imagined such a historic irony when the US army deployed to exterminate Native Americans from the face of the earth?

(Photos of Sioux chiefs from The Vintage News.)

(Photo from Facebook wall of Women at Standing Rock)

(Photo of protester at Standing Rock by Stephanie Keith/Reuters)