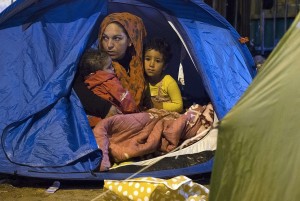 French president François Hollande is the same kind of socialist as Bernie Sanders–the racist, xenophobic kind that oppose immigration & support war. His regime has shamefully been razing the shanty towns of Roma & deporting them to Romania in direct violation of the Schengen Agreement allowing working people free movement across borders within EU countries. France & Romania are both EU members. Actually many of them never lived in Romania but grew up in France.

So it comes as no surprise that Hollande’s regime has been less than hospitable to refugees–using police violence against them at Calais & demolishing refugee camps set up near Paris under train trestles & elevated metro lines, in outlying areas, & across the county.

Conditions in the camps are deplorable & squalid since families, numbering from 200 to 400 in each camp, are not provided with basic necessities like toilets, food, medical assistance. What they receive is only from the kindness of French citizens. Under international law, refugees who request asylum, as many camp residents have, qualify for accommodations at a local hotel–not forthcoming under the Hollande regime. Instead they send in demolition crews talking mealy-mouthed about public health concerns. Whose public health? Because with no place to go, women with children, the elderly & infirm will end up living on the streets & there are fewer more dangerous threats to health.

This is a Syrian women waiting with her kids as the demolition crews move in on a camp under a metro line in northern Paris. The UN refugee agency does not provide assistance to makeshift camps so they have no place to go.

So much for socialism Hollande-style!