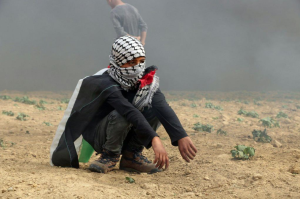 There were four Palestinians killed by Israeli snipers yesterday: 24-year-old Ahmad Rashad Al Athamna, 25-year-old Ahmed Nabiel Abu-Aqel, 19-year-old Abd Al-Aal Abu Taha, & 15-year-old Mohammed Ayoub. Mohammed was killed by a gunshot to the head. It’s safe to assume that Israel deployed its best sharpshooters against unarmed, peaceful protesters at the Great Return March with the express intent to kill young men, though they have also shot women. These deaths are summary executions & are human rights crimes for which Israel should be tried in an international tribunal. They cannot be called war crimes since only one side is armed.

May our four young brothers Rest In Peace. May we not rest in our support for Palestinians in their struggle against colonialism, occupation, apartheid, genocide.

This young boy at the march yesterday is a target whose exhaustion in battle shows in his face.