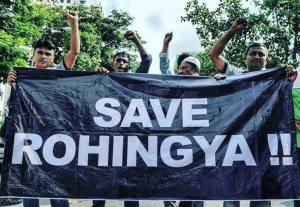 Many are asking “why is the international community silent on the genocide of Rohingya Muslims in Myanmar”? If by ‘international community’ we mean phalanxes of human rights activists actively engaged in defense of the Rohingya, the answer is that Rohingya activists are working tirelessly on social media, by organizing rallies & protests where they are in exile, & by holding public tribunals on Myanmar’s human rights crimes to build that movement. But it has a long way to go.

If by ‘international community’ we mean governments around the world, the answer is that the most powerful of them have vested economic interests in Myanmar, human rights issues in their own countries, & don’t give a damn about genocide against Rohingya Muslims.

The economy of Myanmar is controlled by the military, making the capitalist class indistinguishable from the political apparatus. In the past decade, in order to enrich itself even more off the backs of Burmese working people, the military junta initiated a program of neoliberal economics & actively courted foreign investors in oil & gas exploration, manufacturing, mining, hotels & tourism, transport, telecommunications, real estate, livestock & fisheries, agriculture, construction & services. For manufacturing companies (i.e., sweatshop operations), low wages of about $70 a month is the compelling attraction. Other than providing a human rights face to genocide, the primary presidential responsibility of Aun San Suu Kyi seems to be drumming up foreign investment. In fact, the military may have installed her phony civilian regime primarily as a means to attract investment.

The scale of foreign investment is immense: as of about two years ago, 3,032 foreign companies & 32 foreign-invested joint ventures from 36 countries operated in Myanmar. Some of the top investors include China, Thailand, Singapore, Australia, Bangladesh, Brunei, Indonesia, South Korea, Japan, Malaysia, India, Canada, the Philippines, the UK & several other European countries, the US. Do you think the leaders of any of those countries will speak out against genocide in Myanmar when they all have billions of dollars at stake?

Arakan (Rakhine) state is involved in several neoliberal projects because of its resources & key location as a coastal state. These projects include land grabbing from Rohingya farmers. That is a strong motivating factor in the genocide of Rohingya but the primary cause is rooted more in the legacy of English colonialism. As we know from the struggles in Kashmir & Myanmar, the legacy of colonialism is not yet decisively uprooted & defeated.

We stand in full solidarity with the Rohingya struggle to stop the genocide & for human, democratic, civil, & refugee rights.