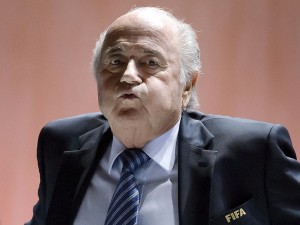 This is FIFA president Sepp Blatter. No one knows how this master criminal described by one commentator as a “wedding singer-turned-sports industrialist” escaped indictment by the US Justice Department in their sweep of 14 FIFA officials on 47 counts of racketeering, wire fraud, & money laundering. The US has jurisdiction because those crimes were committed here. And “those crimes” because the actual rap sheet against FIFA is ten miles long involving dozens of countries & corporations.

Sports commentators are unable to contain their gloating over the exposure of FIFA & the accusation that it is a criminal enterprise run like a feudal fiefdom & employing the politics of colonialism. The US indictments say the officials took over $150 million in bribes & kickbacks in return for media & marketing rights. Reportedly, there were bags of cash involved. It was that venal & sounds like the CIA in Afghanistan. All that of course implicates corporate sponsors who were doling out the bribes.

Sepp Blatter might be another one of those teflon characters because he orchestrated the whole enterprise, called the “world cup of fraud” by the head of the IRS criminal investigation division. And yet he wasn’t indicted. It would be good to hear the Justice Department explain such a notable exemption. He can’t be prosecuted for his misogyny & Islamophobia perhaps but he can certainly be held contemptible.

In fact, he was re-elected today as president of FIFA. When commentators were asked how that could happen they responded with comparisons to the patronage system of Boss Tweed (a 19th century mayor of NYC notorious for corruption) & Richard Daley (a former mayor of Chicago also renowned for corruption). He had a lot of chits out & he called them in.

FIFA was scheduled to vote today on a motion from the Palestinian Football Association to exclude Israel from membership for preventing Palestinian players from freely crossing the border between Israel & Palestinian territories, hampering their ability to train & compete. There’s no news yet if that vote took place. Palestinians should certainly pursue that exclusion–but then again, they might want to cut their losses & get the hell out of FIFA.

One could write a book on FIFA misconduct, not just in allocating contracts & choosing venues but in making demands like in Brazil that cost millions of dollars for temporary infrastructure like stadia & roads that drained public services. Their demands also involved gentrifying areas surrounding the venues, dislocating slum dwellers & squatters.

Hopefully this expose is the beginning of the end for FIFA. Blatter-ass wasn’t taken out but everybody knows for sure now what a contemptible, corrupt lowlife he is.