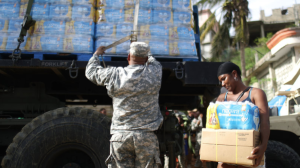 Now, about four months after Hurricane Maria walloped the hell out of Puerto Rico, the government estimates a third are still without power, clean water, & food. Many Puerto Ricans estimate those without power at closer to 80-percent. But tomorrow the Federal Emergency Management Agency (FEMA) will end emergency water & food deliveries because ‘giving free water & food means families are not going to supermarkets to buy’. The functioning of capitalism cannot be fettered by a category five major hurricane. Commerce & supermarkets (even with empty shelves) must go on so the economy doesn’t collapse & socialism doesn’t rear its ugly head. Makes you weep. But do you think racism might be massively involved?

Photo is US soldier finally doing something of value to the human race by delivering water to San Isidro, Puerto Rico.