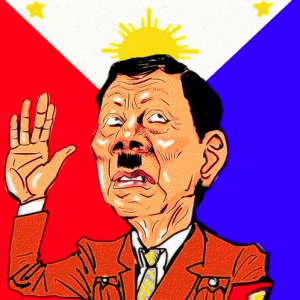 Lest there be any confusion about the Islamophobic & fascist character of Vanessa Beeley’s politics, she has come out openly endorsing Duterte’s murderous aerial & artillery assault on the city of Marawi from May through October 2017 under the guise of destroying ISIS control over the city. Over 600,000 civilians from the city & surrounding province were forcibly dislocated in that siege which the US military was involved in. There have long been US troops stationed in the province but the Pentagon claims its role in the siege was not combat troops so much as intelligence, training, & technical support. Just like the US ‘support’ role in the carpet bombing of Yemen.

Just so we’re clear about Duterte’s politics in Marawi–if we don’t get his use of vigilante death squads against the poor in Manila–last February he said that Moro Muslim women who resist persecution should be ‘shot in the vagina’ because they are ‘useless without their genitals’. Moro Muslims in the province have long sustained persecution, including massacres, mass rapes, & repeated military assaults.

Beeley’s support for US military involvement in Marawi only appears to be at odds with her opposition to US involvement in Syria. The unifying ethos of her fascist politics is hatred for Muslims & for their resistance to persecution, war, occupation, genocide. Her support for the Assad dictatorship is a coherent continuation of her support for Duterte & for the Burmese genocide against the Rohingya people.

(Caricature of Duterte by takeshioekaki)

This is a piece I wrote about the Moro Muslim struggle in May 2017: 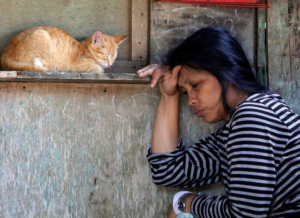 If we are to believe media reports, ISIS & al-Qaeda fighters are replacing US & European military hegemony all over the planet. If they keep expanding at the reported rate, they’ll soon have more military bases than the 800 to 1,000 US Pentagon bases. Of course, if they weren’t being supplied arms from Israel, Russia, the US, & other countries, ISIS & al-Qaeda would cease to exist.

The latest eruptions? Modi reports ISIS forces in Kashmir; Suu Kyi reports them among Rohingya in Arakan state; Duterte just imposed martial law to fight ISIS in Mindanao, the largest & southernmost island in the Philippines. The largest city on Mindanao is Davao City where the Duterte family is part of the ruling elite & where Duterte, as the mayor, became notorious for orchestrating death squad campaigns against alleged drug users & street criminals.

Because it was a Spanish colony from 1521 to 1898, including during the era of the Spanish Inquisition which compelled conversion of Jews & Muslims, the Philippines are a predominantly Christian country. But Muslims have been in the Philippines, centered in Mindanao, since the 13th century when Muslim traders settled there. After the Spanish conquest of the Philippines, which followed the expulsion of Muslim rule over the Iberian peninsula by only 30 years (1492), Muslims in the Philippines had to feign conversion to Catholicism or be killed. Those who remained Muslim were called Moro by the Spanish conquerers, which is a derogatory name derived from Moors, originally the Berber & Arab people from North Africa who ruled the Iberian peninsula for almost 800 years, ending in 1492. And it might be added, who ruled with considerably more tolerance than the Catholic monarchy.

Since then, Muslims in Mindanao & surrounding parts of the archipelago have fought against the Spanish, the US military (more than once), against the Japanese occupation in WWII, & successive Filipino regimes. They have sustained persecution, massacres (including being slaughtered while praying at a mosque), mass rapes, & repeated military assaults. Anyone who accepts the word of the Duterte regime that the insurgency in Mindanao is by ISIS-linked forces needs to have their head examined.

This bereft woman was displaced by fighting in Marawi City between government forces & allegedly the Maute group, a militia founded in 2013. The Duterte calls the Maute group a “radical Islamist” group & has accused them of beheadings. It is wise to suspend damnations until more reliable sources can elaborate the politics of the group which is likely quite small & does not require the imposition of martial law to defeat.