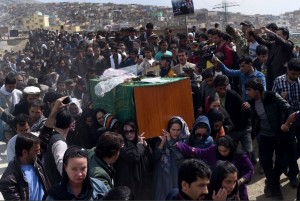 The funeral cortege of Farkhunda, the young woman beaten to death in Afghanistan, was attended by hundreds of men chanting with the women mourners for justice. This doesn’t sit well with US war propaganda that portrays Afghan men as savages & the US Marines as a salvation army for Afghan women. That stinking lie is the bedrock of Islamophobia.

The caption to this photo said “Women carry Farkhunda’s coffin amid crowds of men, a rare act of protest in a male-dominated society.” That crap might fly if we didn’t know the rape rates of female soldiers in the US military are sky high & the Pentagon refuses to address the problem. And there are a lot of other damning statistics we can drag out to expose US war propaganda & the male-dominated character of US society.

May Farkhunda RIP. May we use our political energies to demand US out of Afghanistan! & US out of Iraq!