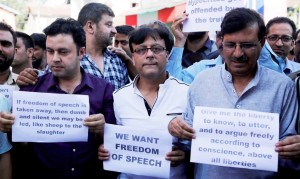 Facebook’s censorship of posts about Kashmir, particularly those about the extrajudicial execution of Burhan Wani as well as videos of Indian army violence, is a serious violation of the US Bill of Rights which legally binds FB since it operates out of this country.

Lots of activists are making a big stink about it, especially on Twitter, but no major media source has seen fit to even mention it. If you google the issue you find it mentioned in a few Indian media sources including Catch News, Sikh Siyasat News, Indian Express; in Dawn, a Pakistani publication; & by two bloggers including myself & Dibyesh Anand. The only other media report is in IBTimes, an online publication which also owns Newsweek.

Those who have been censored by having posts, photos, or videos removed or who have been suspended should let me know so we can find a forum to discuss this problem of censorship & challenge its legality.