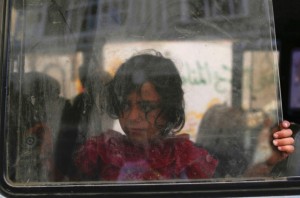 Israel has temporarily abated Operation Ethnic Cleansing but solidarity activitists cannot be deceived, nor our protests ended. As long as the Israeli blockade prevails, Gaza will be unable to get equipment to remove the mountains of cement, will be unable to rebuild, thousands will be homeless with no place to live or go the toilet, will have insufficient food, no medicines or medical equipment to address life-threatening injuries reportedly sustained by over 10,000 people–& no rest from continued bombing sorties.

Media coverage of the Israeli rampage is like dispatches from a parallel universe. The US Pentagon always waited a respectable amount of time (at least a couple months each time) before they shifted explanations for the US-NATO war in Afghanistan, later echoed in media. Israel is more impetuous in their deceits. Reuters now reports: “Israel launched its Gaza offensive on July 8 in response to a surge of rocket attacks by Gaza’s dominant Hamas Islamists.” This is the first we’ve heard of those rockets in July. Wasn’t the stated reason on July 8th that the assault was retaliation for the Hamas kidnapping of three Zionist kids in the West Bank? A kidnapping we (& Israel) always knew Hamas did not commit?

Israel needs the specter of “Hamas terrorism” to maintain apartheid & conduct ethnic cleansing. If Hamas did not exit, Israel would have to invent it as a foil for their barbarism. On the slight chance the unity agreement signed in April between the Palestinian Authority (PA) led by traitor Mahmoud Abbas & Hamas worked out, Israel launched a bombing assault on northern Gaza–a little over two months before Operation Protective Edge–& there were no Hamas rockets even alleged. Netan-psycho threatened Abbas: “Does he want peace with Hamas or peace with Israel? You can have one but not the other.” To make Abbas’s choice for him & to maintain the specter of Hamas terrorism, Israel used whatever artifice it could to prevent Palestinian unity.

The crisis of leadership plagues social movements around the world. It has stature as the greatest political dilemma of our era–& has been for a very long time. We see it played out in every political venue from the labor movement to social justice movements to the great struggles for self-determination like in Palestine–& Ferguson. The political weaknesses of Hamas or the PA are not reason to truncate support for the just demands of the Palestinian people. We render them solidarity & trust them to resolve their own leadership problems.

Gruesome images that continue to circulate remind us of the horrors Gaza just endured & we witnessed. It’s a reminder not to retreat from solidarity now that the worst of bombing has abated. The bombing will not cease & the blockade will not end without our continued active solidarity.

This little girl waits in a minibus as her family prepares to leave their neighborhood in Gaza City where the homes are now rubble.

Continue marching, continue educating; build the hell out of the economic boycott of Israel (barcode beginning 729). As schools open up this fall (though church halls are just as good a place), it’s an ideal time for speak-outs, forums, teach-ins as part of evangelizing for justice.