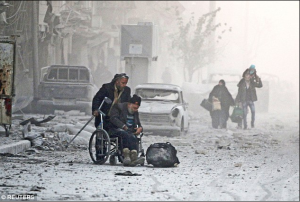 Supporters of Assad who also defend Syrian & Russian bombing of civilians as a freedom struggle against “jihadist terrorists” are touring Eva Bartlett around the US to convince antiwar activists to support that point of view. They promote her as an “independent journalist” with on the ground experience in Syria.

Perhaps those not already committed to Assad-think that war is peace could ask Bartlett about her political collaboration with Fares Shehabi. Shehabi is an industrialist & chair of the Syrian Federation of Industry, a member of the Syrian parliament representing Aleppo, & a candidate for Syrian Prime Minister.

According to Bartlett, Shehabi organized a trip to Aleppo in November for herself & 13 unidentified western journalists with security provided by the Syrian Army.

Bartlett says she has been to Syria six times in the past four years, has met with Assad, & knows for sure the majority of Syrians support his regime. Is it possible that when she interviews Syrians they are reluctant to express criticisms to an Assad supporter accompanied by Syrian soldiers? There is, after all, a notorious Syrian gulag where thousands have been tortured, murdered, disappeared.

It would be so useful if Bartlett would explain to activists on her speaking tour how traveling several weeks in a country as a guest of the regime & embedded with its military makes one an authority on its complex politics & war. Many have spent much more time in England & still can’t explain the Labour Party, let alone the character of the opposition groups within it.

If one follows Shehabi’s social media posts, they are indistinguishable from the allegations made by Bartlett, Vanessa Beeley & other Assad propagandists. In fact, Shehabi often posts their so-called journalism. It’s all there: the shameless maligning of baby Omran; claims the White Helmets don’t even exist outside of videos; that the militias are all US-backed “head-chopping jihadists”; that “terrorists” are holding civilians hostage & using them as human shields; that there was never a popular uprising against the beloved dictator.

So perhaps Bartlett could explain on her speaking tour how her journalism is “independent” from the Assad regime & clarify how she is not functioning as its propagandist.

Photo is scene after the December 9th bombing of a field hospital in east Aleppo. Reporting is by Waas Al-Kateab, a Channel 4 news journalist reporting from east Aleppo & not protected by Syrian Army soldiers.