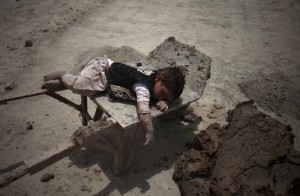 Emancipation US-style: this little guy is a brick worker in Kabul, Afghanistan. Since it’s likely he’s malnourished, it’s hard to judge his age but he is surely no older than two. Let his image stand as a scathing indictment of the US-NATO war; no more need be said to rebut all the lies & treacheries we’ve been fed to justify this criminal & barbaric occupation.

The photo was taken last June to commemorate the UN’s World Day Against Child Labor. UN agencies take time & resources to chronicle child labor in Afghanistan but they can’t find it in themselves to condemn the war.

US-NATO out of Afghanistan! US out of Iraq! Bring all the troops home now!